An interview with John Lilley, Managing Director of The Peoples Mosquito project

As work continues on returning a de Havilland DH.98 Mosquito to UK skies for the first time in a quarter of a century, The People's Mosquito is offering supporters the opportunity to add their name to the story of the Wooden Wonder.

Through the charity's restoration partners, Sussex-based Retrotec Ltd, rapid progress has been made towards the completion of the first de Havilland Mosquito fuselage moulds to be built in the UK for more than 70 years.

With the exciting launch of this fundraising initiative, The People's Mosquito is offering five levels of exclusive rewards for supporters, ranging in value from as little as £25 up to £5,000. Each level of support offers its own unique rewards package, including from as little as £100 the opportunity to add your name – or that of a loved one – permanently to the mould itself. In doing so, supporters can physically add their name to the story of one of the most famous and versatile aircraft to emerge from the dark days of World War Two.

For those warbird and Mosquito enthusiasts able to do so, higher reward levels, starting at Gold level and £500, offer backers the chance to enjoy a visit to Retrotec's facility and witness history coming alive as Mosquito FB.VI RL249 takes shape.

Elite Diamond and Platinum packages will see donors receive a VIP invitation to Retrotec to tour the facility, meet the team and personally sign their own mould infill, as work draws to its completion. And that's not all. Diamond or Platinum backers will have the opportunity to join The People's Mosquito and invited guests to witness the first public flight of a de Havilland Mosquito in the UK for well over 25 years, as well as receive a guided tour around the aircraft. Subject to all necessary and relevant permits, permissions and insurances to enable the carriage of fare-paying passengers, Platinum supporters will also gain priority access to a flight in The People's Mosquito.

"As the country faces is toughest battle since the end of World War Two, efforts to return a Mossie to UK skies continue to gather pace, backed by British industry and public donations from all over the world," said John Lilley, Managing Director of The People's Mosquito. "During times of adversity, incredible stories often emerge – the Mosquito being one such example from our history. We're incredibly excited to be writing the next chapter in that story. The drive towards returning RL249 to flight serves as a reminder, if one was needed, of what we can achieve when we come together."

The aim of the campaign is to fully fund the completion of all 22 infills that constitute the pair of 11m-long fuselage moulds. The campaign target is to reach £250,000 by the end of summer 2020. Each complete mould will be used as the former over which the Mosquito's unique composite wooden construction, featuring Canadian spruce, birch and balsa wood, is bound, glued and cured. The result is the lightweight, extremely strong airframe that underpinned the Mosquito's famed war-winning performance. 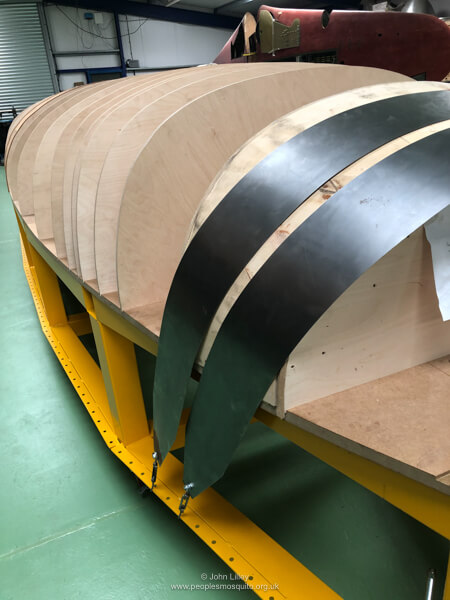 The campaign, named Operation Jericho 2020 in honour of the famous February 1944 raid on Amiens prison, in which low level Mosquitoes breached the jailhouse walls to free French resistance fighters, aims to break down the final funding barrier for completion of the moulds.

You can support the campaign at : www.peoplesmosquito.org.uk/campaigns.

The de Havilland DH.98 Mosquito remains one of the most influential aircraft ever designed and an exemplar of British engineering. It played a pivotal role in the Allied war effort from 1941-1945, and continued to serve with the Royal Air Force until the mid-1950s, well into the jet age. At the height of World War Two, the Mosquito was the world's fastest production aircraft; it was the world's first true multi-role aircraft and helped to pioneer the use of composite construction techniques, now ubiquitous in today's aviation industry. Its ground-breaking construction also included the first use of radio frequency heating (similar to a microwave oven) in the construction of the aircraft.

About the People's Mosquito Ltd

The People's Mosquito is a registered UK charity and full member of Aviation Heritage UK, whose aim is to inform and educate the public and future generations on the Mosquito and its place in history. Its motto is 'To fly, to educate, to remember' as it works towards restoring and returning this important aircraft to the sky.

The charity is publicly backed by Airbus UK – an international reference in the aerospace sector, whose own heritage history includes manufacture of the Mosquito between 1948-1950. More than 80 de Havilland Mosquitoes, including the last ever 'Mossie' to roll off the production line, were completed at Broughton, now home to Airbus UK.

Collaborating with East Sussex-based restoration company Retrotec Ltd., the charity is working towards restoring a Mosquito lost on a training flight from RAF Coltishall, Norfolk in 1949. In doing so, the project will deliver the first UK-built Mosquito in more than 70 years: the last UK-built example rolled off the line at Chester on 15 November 1950.

Received by mail to Guy Black at Retrotec, these pin-sharp period photos will be extremely useful for our work on the fuselage as many clues are apparent. The sender was anonymous, signing with a hard-to-read name but we think it was from a Doug Scot from High Wycombe and if he reads this 'Thank you so much!" 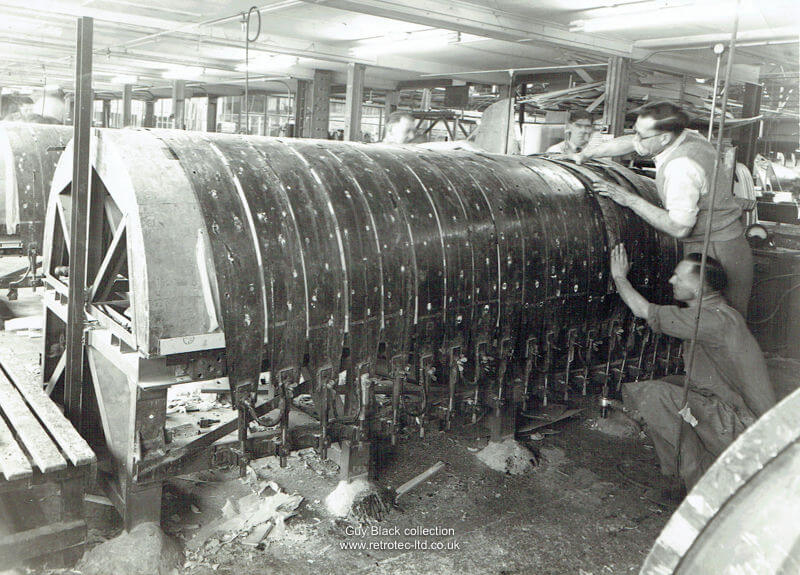 One photo was taken at the Timber Research Association and seems to show a prototype fuselage section being glued up using heated clamps to cure the glue. 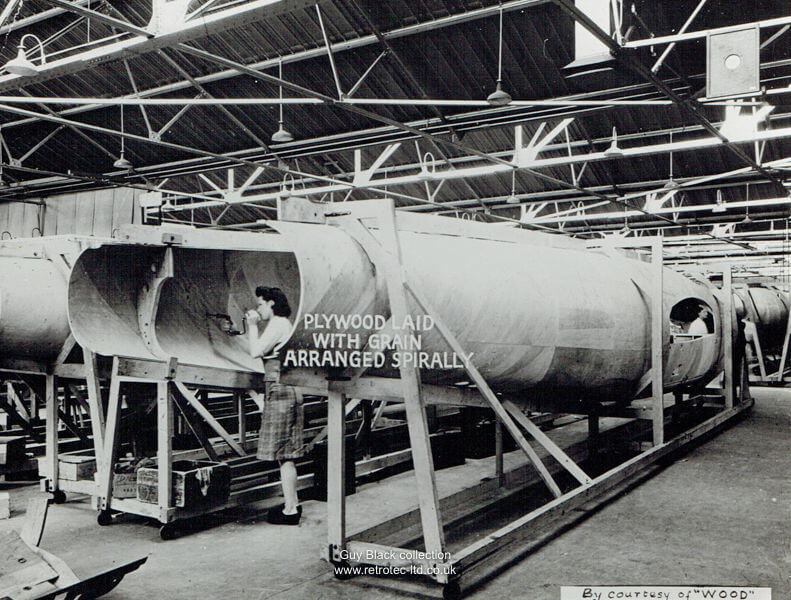 Another picture comes from Airspeed showing a production line of Mosquito fuselages. 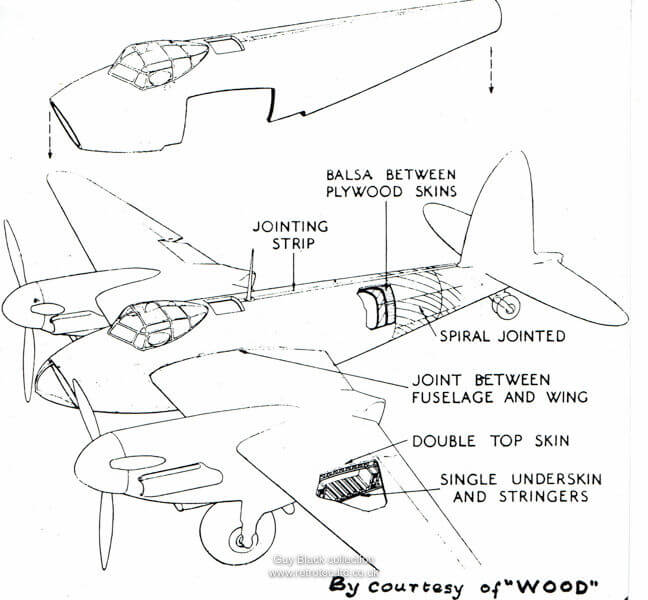 The final picture is a diagram of a Mosquito's basic structure. These period photos are of immense help to us, and if anyone else has any they could either donate or loan to us, this would be immensely helpful

Retrotec are very proud to be significantly involved in re-manufacturing a number of major assemblies for the Tempest 2 for Graham Peacock. The work includes: a new pair of tailplanes, as we were unable to salvage virtually no existing parts due to inadequate work by previous restorers or lack of supporting paperwork. 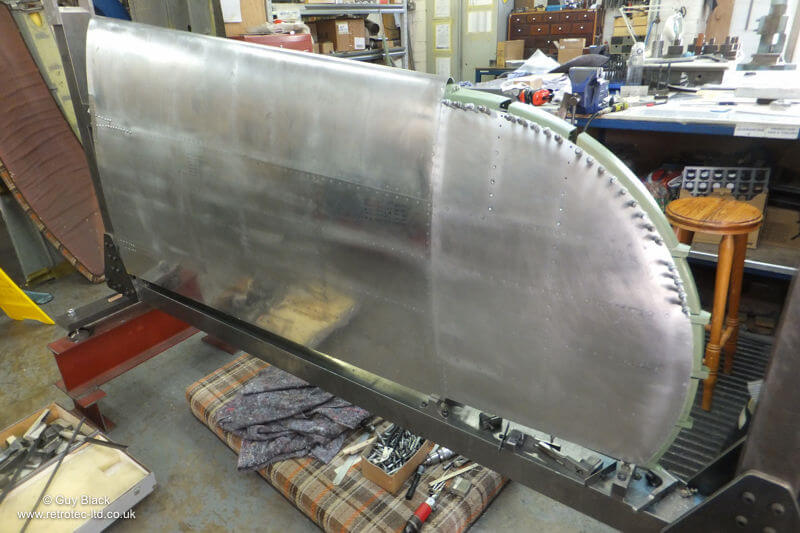 The same applied to the massive tubular centre fuselage section which was an immensely complex and heavily-made assembly, built on the familiar Hawker tubular design but huge in size and construction; we even had made new forged wing attachment points - so heavy that it needed two people to lift them almost 3/4s of the weight was subsequently removed in machining operations carried out in house, by Retrotec. 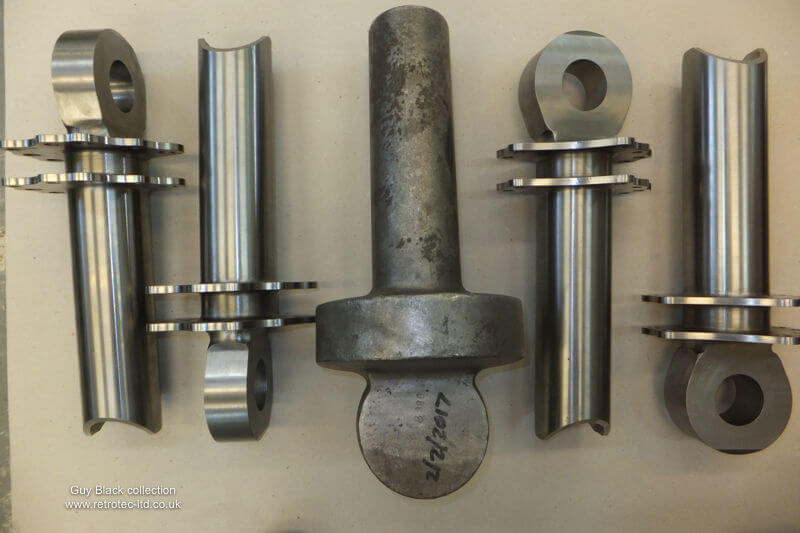 Finally the magnetos was handed to us. In this case they had been ruined by an American magneto specialist and many parts had to be remanufactured – some were entirely missing including the complex contact breaker sets - probably removed in India for their scrap platinum. Drawings had to be created by Retrotec's design team and again manufactured in house. 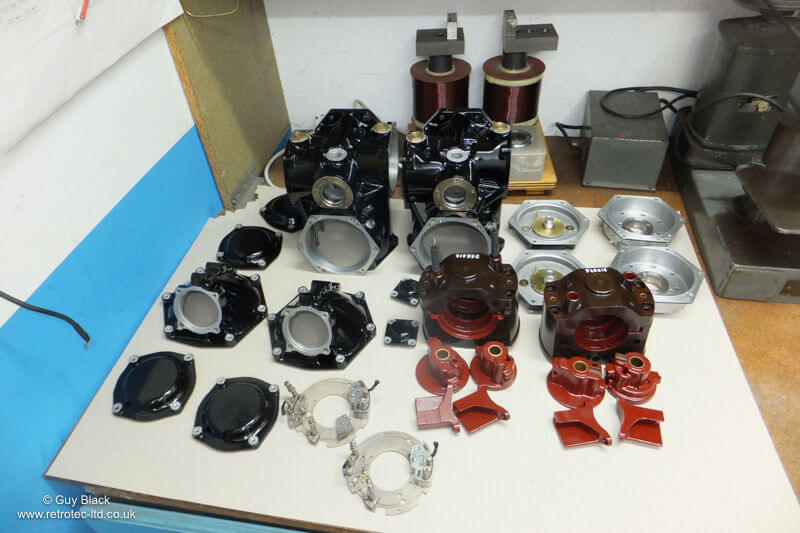 The final item, resembling the Forth Bridge as described by Airframe Assemblies, who are rebuilding the wings, was the crucial wing attachment point to fuselage jig, manufactured and designed by Retrotec to ensure that the wings are perfectly mated to the fuselage. Being a laminar flow wing, it is essential that the angles and location are in perfect alignment. 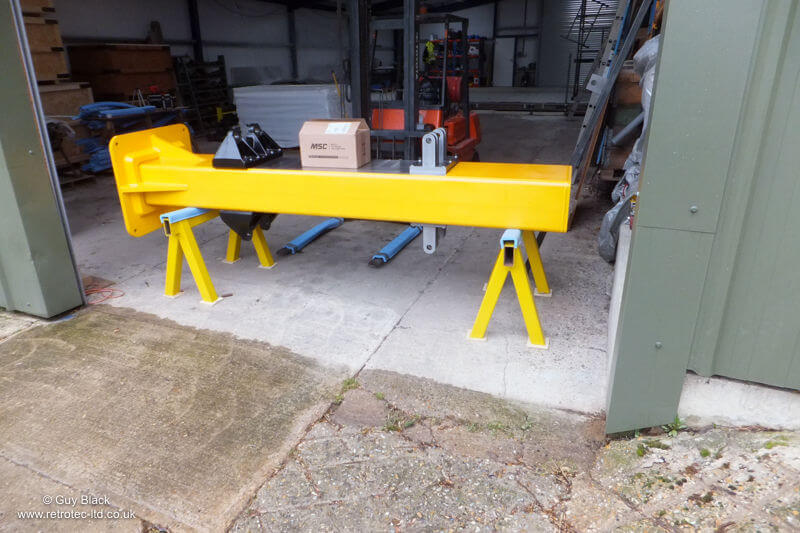 An interesting aside to this; we have frequently been accused of over engineering jigs, but Guy Black, when an apprentice at Weslake and Co, was sent to their jig and fixture design and manufacturing base as part of his training and his immediate mentor turned out to eb the chief jig and tool designer at Hawkers during the war. No wonder the fuselage and wing jig had an uncanny resemblance to the Hawker originals!

John Lilley, Managing Director of The People's Mosquito, recently came to visit Guy Black at Retrotec to see the latest progress on the Mosquito fuselage moulds. 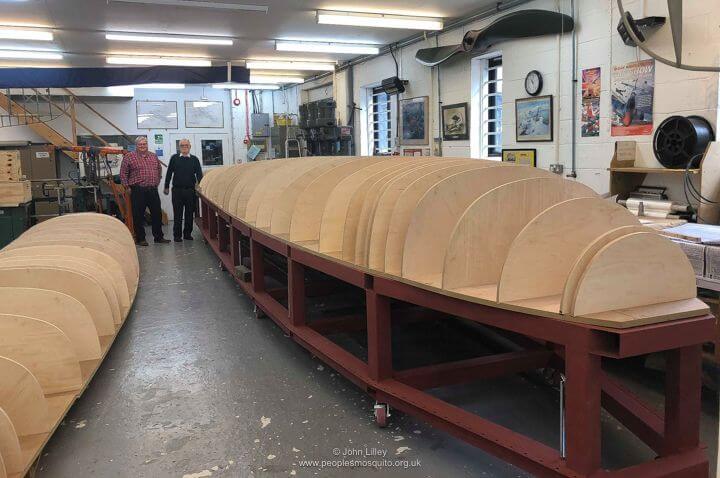 John commented 'well I was amazed and cannot tell you the sheer size of these things! We still need your support to finish them off so please if you can spare that £1 go to The People's Mosquito website for links to donate. 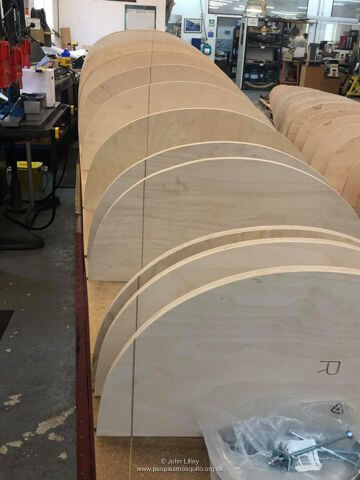 Guy commented that he 'was delighted with the progress that the project had made todate particularily as we can now all see construction commencing'.

At an ceremony at Brookland Museum, on 17 June, he was presented with a Lifetime Achievement by HRH Prince Michael of Kent, on behalf of the Transport Trust. 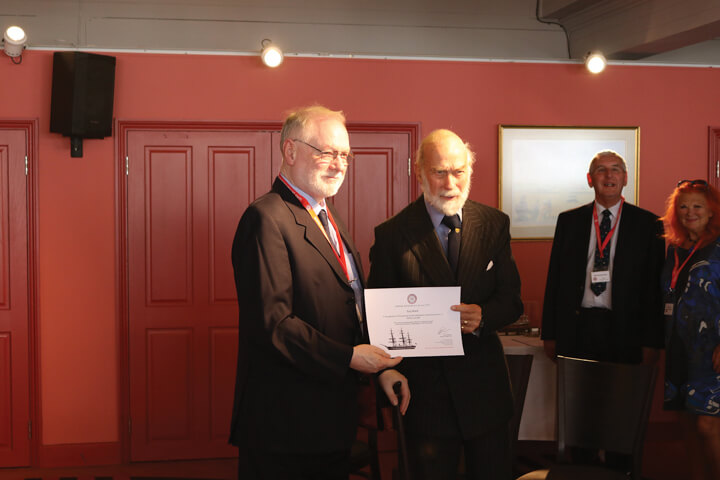 After the event, Guy commented "I accepted this award not as a personal endorsement, but on behalf of the many people who have been supporting my ambitions and challenges over the years, to produce superb engineering". 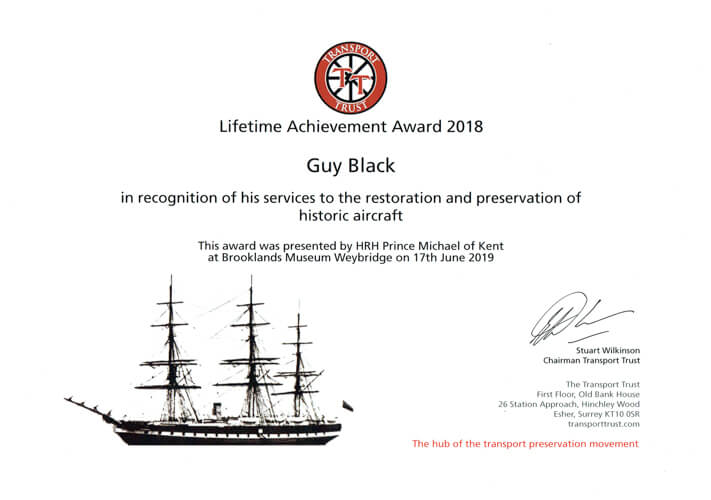 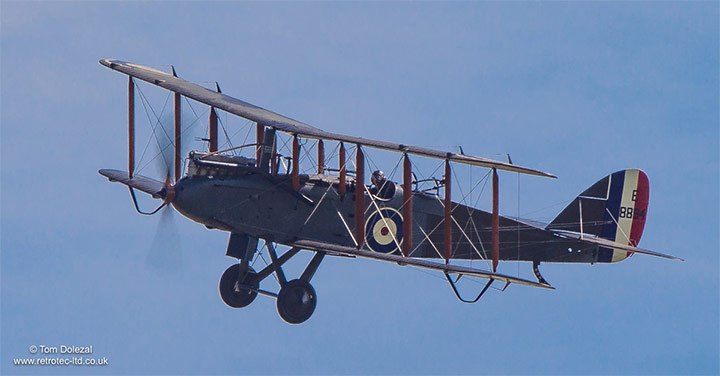 The De Havilland DH9 E8894 was out today at Duxford for some more engine runs.

Retrotec has been contracted to rebuild at least one of these engines to zero-hour, for a Piston Provost.

DH9 is now at the end of its 17-year rebuild and is awaiting its test permit from the CAA. Engine runs have been undertaken at Duxford.

We have been contracted to rebuild at least one of these engines to zero-hour, for a Piston Provost.

We have been honoured with a contract to reconstruct this iconic aircraft by The Peoples Mosquito. Retrotec is preparing and expanding its new premises to accommodate this work.

The fuselage and tail-planes of this incredible Centaurus-engined 2nd World War fighter aircraft are being reconstructed by us from a disparate collection of parts.

A rebuild from a corroded and incomplete engine for Vintage Wings of Canada. Without doubt the most challenging engine rebuild in the history of Retrotec.

The supply of a very large number of components for this incredible aircraft started by the late George Neal and now with Vintage Wings of Canada.

As well as the on-going restoration of the Aero Vintage Fi 156 we have helped a handful of other Storch owners with a multitude of manufactured parts (from original drawings) including forged Argus engine bearers.

The reconstruction from a very poor example to full working order for Brooklands Museum.

Runs on test stand. It sounds just like a German U Boat engine!

See the recently assembled Hawker Fury I at the Imperial War Museum, Duxford. Retrotec's latest restoration of the only known existing Hawker Fury was recently unveiled outside Duxford's Hangar 3.
www.historicaircraftcollection.ltd.uk

A new associated E-Commerce company, Aero Vintage (Spares) Ltd. that retails the many thousands of spares and parts we stock or manufacture.
www.aerovintagespares.com

See the recently completed Fe 2b in the Bomber Command Hall at the RAF Museum Hendon.

We have recently installed state-of-the-art CNC milling and turning facilities.

A vast range of parts for the Hawker biplane series is available, though not always from stock. This includes wheels, brakes, radiators, streamline wires, tyres, Kestrel engine parts, instruments, panels, propellers, and virtually every part required to complete the rerstoration of these rare and beautiful aircraft.